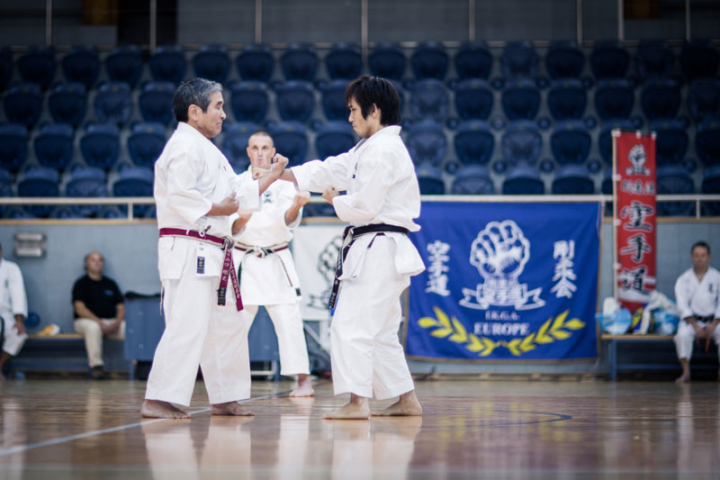 The name of Goju Karate was developed from a Chinese Classic on Martial Arts called “Bu-Bi-Shi” Goju refers to the natural combination of “Go” ( Stiffness or Strength) and “Ju” ( Softness or Flexibility) . Herein lies the unique ideas of Goju Karate. Fundamental forms of Goju Karate are considered to be Sanchin and Tensho , since they demonstrate “Go” and “Ju”. You will understand when you see Sanchin, that every muscle of the body is fully strained. There is no unguarded point and the form is full of fighting spirit. This is the typical form of “Go”.

The Form of Tensho, however, does not disclose the fighting spirit; rather, it surges up out of the inside and shows the slow curved movement, as if it is waiting for the instant of the explosion hidden deep within the body. This is “Ju”.

From “Go” to “Ju” or from “Ju” to “Go” there should be freedom and ease of change in movement. In this way, if you find the secret or fundamental principle similar to the purpose of the Zen philosophy. When your opponent attacks you with “Go”, meet it with “Ju” and conquer him. If the opponent faces you with “Ju”, meet him with “Go” and beat him. This secret of Martial Arts is very clearly shown in the forms of Sanchin and Tensho.

Breath, body and mind are closely related, therefore, it is natural that one of the secrets of the Martial Arts is the proper use of breathing. 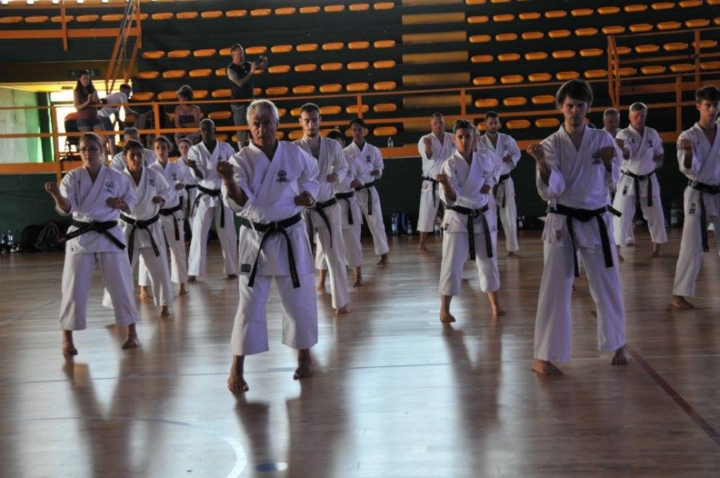 This is the reason that we of Goju Karate use our unique breathing before and after practice. Concentrating all the muscular strength at one point, train the body and consciously adjust the breath by the unification of spirit.

Goju Karate is said to have the color of the oldest Martial Arts Traditions. Because it incorporates the form of animals and unique breathing, it keeps primitive traditional forms of Martial Arts full of fighting spirit. But such a form presents only this one aspect. We should coordinate “Go” with the “Ju” of Yoga, which helps us to attain a perfect impersonal inspiration trough meditation.

I had begun practicing asceticism and Yoga. They taught me the harmony of positive and negative, so that I could conform to the movements of the Great Nature. Just like the development of the everlasting universe, in which we find the harmony of “Go” ( Positive) and “Ju” ( Negative), the way of Goju Karate should be a development of the splendid harmony of free, endless Martial Arts and elegant spirit.