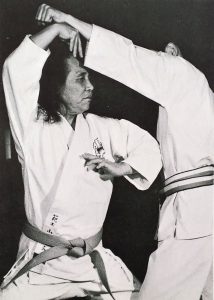 Never before has a single man had such profound effect on the development and propagation of karate-do. Master Gogen Yamaguchi, 10th Dan (level), a man of intense dedication and determination can truly be called a karate legend. A master of Yoga and a Shinto priest, a man that truly has united both aspects of go and ju into a concerted union.

Gogen Yamaguchi was born on January 20, 1909, in Kagoshima city on southern Kyushu. Already as a youngster he showed great interest in the martial arts. During his early school days he trained in kendo, (Japanese fencing) and it was during this time that he started his karate training under the tutelage of Mr. Maruta, a carpenter from Okinawa. Mr. Maruta, who was a Goju practitioner, was drawn to the young Yamaguchi’s serious attitude and his willingness to train hard. Mr. Maruta taught Yamaguchi all he knew about the Goju system.

During his college days as a law student, Yamaguchi established his first karate club at the Ritsumeikan University in Kyoto. Soon the dojo became famous in the city, known for its hard training and fierce breathing exercise. In those days karate men practised only kata (formal movements) and yakusoku kumite (prearranged sparring) and were unable to have matches between each other since they did not hold back their techniques. It was during this period that Yamaguchi created the first stages towards what is known as jiyu kumite (free fighting) and established rules to decide the winner of a match. Some of the rules are still in use today in what is known as sport or competition karate. 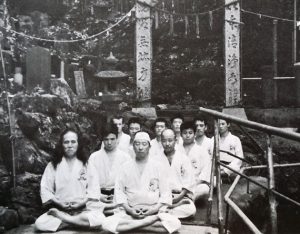 In 1931, at the age of 22, Gogen Yamaguchi was introduced to the founder of the Goju style, – Master Chojun Miyagi. This meeting proved to have a profound affect upon Yamaguchi’s outlook on karate. Previously he had only considered the hard aspect of Goju but after his meeting with Master Miyagi he was determined to train himself spiritually as well as physically. Master Miyagi thought highly of Yamaguchi who seemed to have mastered the hard aspect of Goju so well and gave him the nickname Gogen, meaning “Rough”. He then appointed Gogen Yamaguchi as his successor of the Goju school in Japan.

During the years to follow, Gogen Yamaguchi often spent long stays at Mount Kurama where he subjected himself to ascetic exercises and hard training with Sanchin, meditation, and fasting. Between 1938-1945, he was sent to Manchuria on government and military assignments. On several occasions during his stay there, he could thank his skills in karate and his mental training that he stayed alive. Following the war, Yamaguchi was taken prisoner and sent to a prison camp in Mongolia. He was kept there under harsh conditions for two years. Once again his strength and skill were severely put to the test. During all these years he still continued to train and develop Goju karate. 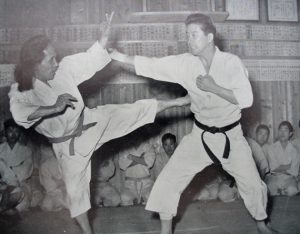 After his release and return to Japan, Yamaguchi became one of the most exciting figures in karate history, known throughout the world as “The Cat” because of his grace and speed in movement, and because of his favourite fighting stance, Neko Ashi Dachi (cat leg stance).

Master Yamaguchi’s contributions to Goju karate and to karate in general have been enormous. Under his leadership the International Karate-do Goju-Kai Association (I.K.G.A) emerged. The organization has increased in popularity both in Japan and around the world. Today there are about 40 countries teaching Goju-Kai karate. Master Yamaguchi succeeded in uniting many karate schools in Japan into a single union which resulted in the formation of The Federation of All Japan Karate-do Organization (F.A.J.K.O.) in 1964. The Kokusai Budo Renmei (The International Martial Arts Federation) in Japan, whose chairman is Prince Higashikuni of the Japanese Imperial Family appointed Master Yamaguchi as Shihan (Master) of the organization’s karate division. He added to the Goju system the Taikyoku Kata forms, – training methods for the beginner students to prepare them for the more advanced kata.

In combining his personal practices of yoga and Shinto with karate training, he founded in his later years Goju-Shinto. He stated that both body and mind are interrelated and through proper breathing and concentration we will be able to understand the essence of the martial arts. This is the reason why the Goju school uses the unique breathing exercise called ibuki, concentrating all the muscular strength at one point, bringing mind and body into a coherent whole.