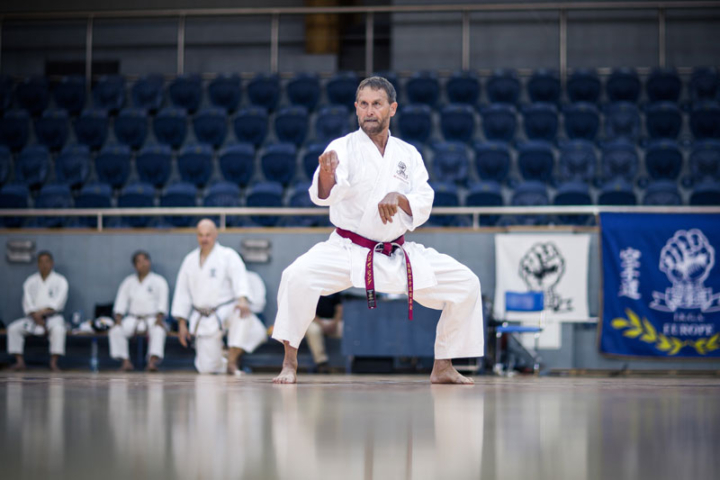 ‘Uechiryu’, ‘Shitoryu’ and ‘Gojuryu’, three well known karate style of the modern karate are inheritors of a Chinese martial art that had spread locally. Due to the abundant and complex nature of their kata, the three styles are considered to be of extraordinary rank. Kata is the beating heart of karate. It is no exaggeration to say that the kata of each style is formed by a specific philosophy.   ’Physical power’, ‘spiritual power’ andthe ‘power of breath’ are the foundation of Goju-ryu Karate-do, which contains ‘Sanchin’ and ‘Tensho’ Kata. The two katas were created by Chojun Miyagi Sensei. In the past Gogen Yamaguchi however established both, ‘Sanchin’ and ‘Tensho’ as “Kihon Kata” (basic form). The way of Kihon Kata breathing is integrated in all Goju Kata. As a result Sanchin and Tensho Kata characterize and are the keys to the other Goju Kata.

The Goju-ryu Kata is comprised of a variety of successive close combat techniques. The typical agile and circular movements are executed by turning the body, hips and shoulders. Each Kata follows its own rhythm which is combined with “kisoku no donto” the rhythm of breading. Not all of the gestures are fast and strong. They fluctuate between hard and soft. Short dynamic motions are immediately followed by calm movements similar to the meditative state of ‘ritsuzen’ (standing Zen), where it returns to energetic power again. The Kata is performed by turning in all directions, East, West, South and North.

Additionally all Goju-kai Kata are divided into four groups. The first three are ‘Kihon Kata’, ‘Fukyu Kata’ and ‘Kaishu Kata’. The Fukyu Kata ‘Gekisai Dai-ichi’ and ‘Gekisai Dai-ni’ were created for beginners by Chojun Miyagi Sensei, the Ryuso (founder) of Goju-ryu. Gogen Yamaguchi, the Kaiso (founder) of Gojukai further divided those Gekisai Kata in 5 parts and created the ‘Taikyoku kata’ from ‘Taikyoku Jodan’ to ‘Taikyoku Mawashiuke’. Each Taikyoku Kata is composed by two versions. Beginners first learn Taikyoku kata before practicing Gekisai Kata. 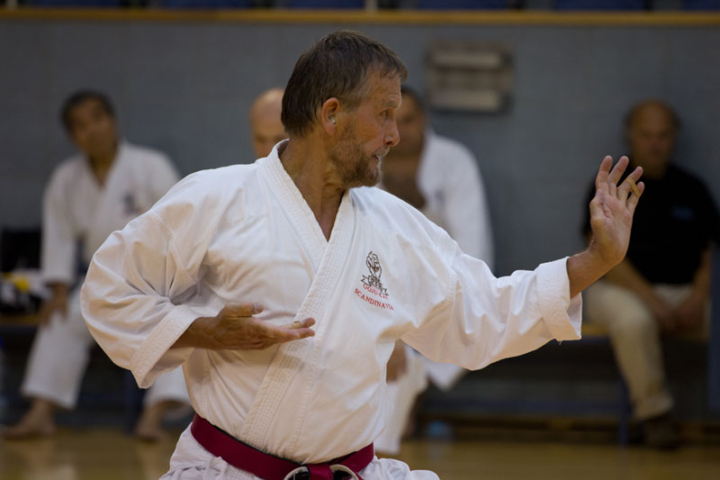 The creator(s) of the eight Kaishu Kata is unknown. Chojun Miyagi learned the kata from Kanryo Higaonna who may by the earliest master who can be traced back in the history of Goju-ryu and who founded a background of the Goju-ryu System. The System was called “Naha-te”. Prior to Higaonna, there was another master named Seiso Aragaki recognized as a Naha-te master. He was known as a master who introduced kata ‘Seisan’.  The fourth is ‘Tokutei Kata’ the Gojukai Master’s Kata. The Goju-kai association is unique among the other Goju Ryu organizations, in that it is the only one to practice the Tokutei Kata created by Kaiso Gogen Yamaguchi and his son Goshi Yamaguchi, the current President and Saikoshihan of the International Karate-do Goju-Kai Association (I.K.G.A.)

The four Kata are not designed to be used for championships. Gogen Yamaguchi intended to give these unusual Kata only to his instructors, who own the 5th Dan grade and the title of ‘Shihan’ (comparable to an academic PhD). This means that these instructors achieved age and maturity to learn this extraordinary Kata. Saikoshihan himself decides when to introduce the Master Kata to a Shihan. The Kata will not be trained according to a strict requirement like all the other Goju-ryu Kata. Every Shihan has to face the challenge to find his own way how to perform and express the Tokutei Kata.