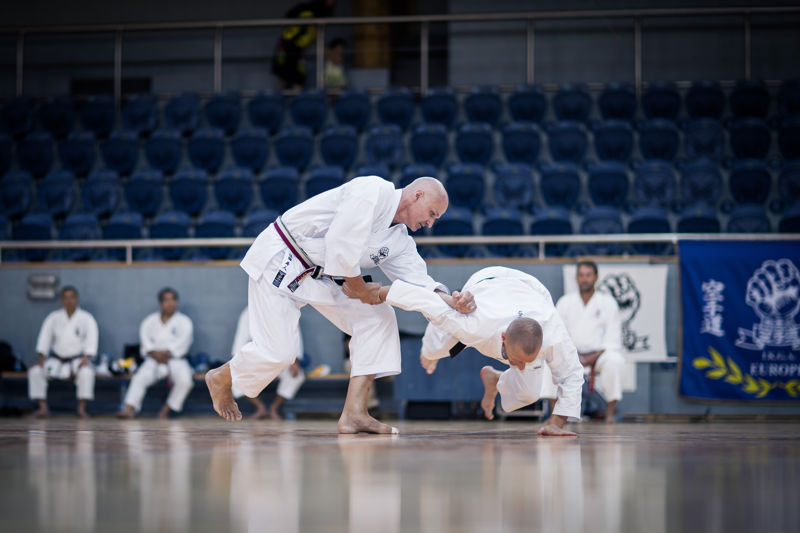 Bunkai, literally meaning “analysis” or “disassembly”, is a term used in Japanese Budo referring to the application of fighting techniques extracted from the moves of kata “form”.

The practice of karate in the old days comprised physical training (tanren), basics, kata, and the practice by two people consisted of hand and wrist training (kote-kitae) also hooking block training (kakete-kitae) and the repetition of techniques extracted from kata.

Whilst Master Gogen Yamaguchi was teaching in a university Karate club in Kyoto, he conceived the addition of sparring (Kumite) according to one’s free will to those traditional training methods. This spread throughout the country and developed into the Kumite competition one sees today. In the beginning Master Miyagi did not oppose the notion of Kumite but was insistent that the essence of Karat-do not be lost. In the late years, Master Gogen Yamaguchi saw that the characteristics of Goju-ryu were gradually becoming lost with the popularization of competitive Karate. He had grave doubts about rules prohibiting the use of techniques learned through kata in competitive Kumite, and became determined to develop Kumite techniques paying more homage to kata. Upon the creation of a Masters Group including Master Gogen Yamaguchi in 1976, my elder brother the late Shihan Gosen Yamguchi and I began research into Kumite using the continuous attacks and defenses of Kata and we began teaching these methods in 1977. Ten “Kata Bunkai Kumite” (kata analysis kumite), from “ Gekisai dai-ichi“ through to “Suparinpei“, have been established in the Japan Karatedo Goju-kai Association of today and these are taught both within and outside of Japan. Within Goju-kai, Kata Bunkai Kumite has been an official competitive event since the “First World Tournament”, held in Japan in 1993.   Kata are performed by way of imaginary attacks and defenses, but there are numerous possible interpretations for the techniques used. The Bunkai kata of the Goju-kai are comprised of continuous attacks and defenses making multifaceted decisions with respect to all techniques, footwork and so forth. It also illustrates how to improve technique by adjusting distances, timing moves properly, and adapting techniques depending on the size of an opponent.  The established Bunkai are not the sole interpretation of the kata. In the examination of higher –ranking black belt holders in Gojukai, besides performing established “bunkai kata kumite”, they are required to give a report on their research on Bunkai using their own interpretations.

Henceforth, in addition to studying the Bunkai of kata, I would like to have karate practitioner’s research the practical application of techniques used in kata as well. I would like to disseminate and establish uniformity within and outside of Japan, and it is my desire that Karate practitioners not rely merely on superficial practice, but also on practice based on receiving proper instruction.

The movement of the Bunkai follows the order of the kata.[nbsp] Bunkai is usually performed with two persons or a group of persons which execute predefined attacks, with the partner performing the kata response with defenses, counterattacks, or other actions, based on the part of the kata. Applying the techniques, footwork and so forth are used in analyzing the Kata. Further, among the “Kime-waza” are some techniques that are not found in the kata, but these were researched and established as developmental techniques within the attacks and defenses in the kata. Of course all movements in actual practice and demonstration have to be applied with speed and force. To perform a realistic Kata Bunkai Kumite the correct execution of the techniques, spacing and timing is very important, with careful consideration of the balance and harmony between the attacking side and the kata side.

The many movements in Bunkai Kumite are all techniques of self defense. It is hoped that by repeated practice, separating someone who has grabbed you the use of counterattacks and so forth will become more useful for actual use in self defense.